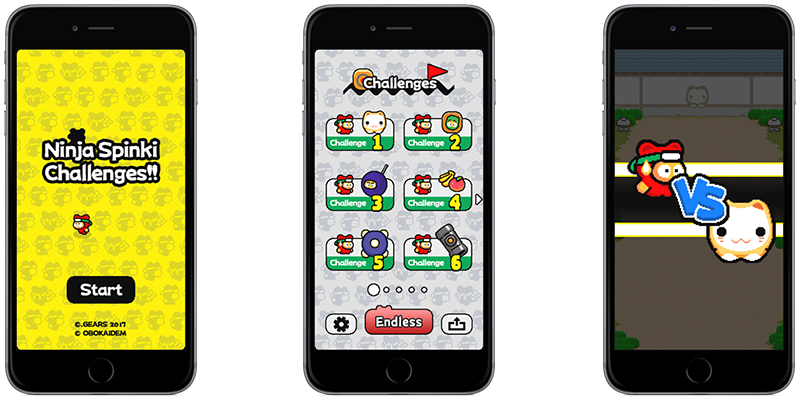 Do you missing less a game of those impossible type Flappy Bird? Well good news: Gears, the Studio that created the game clumsy bird and pixelated launched Ninja Diademy Challenges, a title far more care in terms of image and audio, but that maintains a level of difficulty similar to that launched to fame to its creator.

In Ninja Spinki Challenges us we must control a Ninja while, in theory, train to be a better fighter. Also, if we previously said that this new title from the creator of Flappy Bird had focused more on the details, has also focused on providing variety: there will be up to a total of 30 levels between them which they will have to, for example, Dodge cats, throwing star objectives, overcome what look like pumps or avoid that some fruit ourselves by jumping on them.

We will be able to spend every level after 10 seconds have passed since that has started each one, what initially appears to be simple (not is). But if what we want is one greater challenge, whenever we passed a level, it will be available in “Endless” mode, which means difficulty will increase and will increase non-stop until the ninja is hit and Miss. When we play in “Endless” also we must collect stars, which initially seems to be the score of this game mode system.

If I preguntarais what me seems Ninja Diademy Challenges and had that be sincere, I would say that I seems much more interesting that others creations of Gears. “pique” is still present, but seems much more affordable and fun titles like Swing Copters where fun is at attached nerves, get a high score, and count it. In fact, I’ve been smiling all the time while testing it for this article, so I think that is worthwhile. Have you already tried it? What do you think?

Previous The project of military communications of the United Kingdom moves to 7 iPhone because Samsung is not safe
Next Twitter updates by adding a new section: explore