The public beta of iOS 10.3 is now available 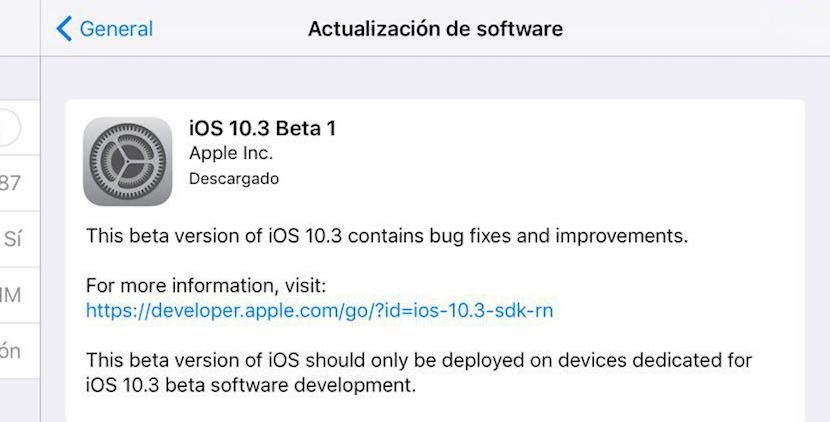 As you know, Apple is immersed in a strong spiral of updates and betas for iOS tests. The most surprising thing was that the first beta of iOS 10.3 arrived shortly after the latest update. However, we know that Apple is always a few steps ahead. On this occasion, I talked nothing of this first private Beta for developers. As now you can try it if you feel like it because it has been released as a public Beta, so any user could exploit its capabilities. Enter and find out how to install it and what are its innovations.

The main novelty of this public Beta is the fact that includes an application, that we don’t truly know how has not reached much earlier, Search my AirPods. And it is those tiny julandrones can escape us at any time. We can now locate them as when you are looking for our devices Mac or iOS. In terms of other features, is maintained a total silence part of the API for the reviews and a supposed improvement of the battery on the iPhone 6s and later that fails to arrive. Apple has a hard job as for battery improvement iPhone 6s, and if it could do with Apple Watch why not the iPhone?

To install the public beta, we need to access this link from the iOS device in which you want to install the public beta. You therefore access system of Betas that probably many already be subscribed. When we fill up all the necessary details you can download profile. Once the installed profile and after restarting the device will upgrade to the Beta version of iOS 10.3 only accessing to General > Software Update as we would any other updates. More easy impossible, you will be telling if you improve something specifically.

Previous Yalu, the Jailbreak of iOS 10.2, available now
Next The resellers are pronounced after recent closures of dealers