Apple always has prided itself of many things, but since the arrival of the iPhone, and later on the iPad, there is one aspect in particular against what its rival Max, Android, has never been able to fight: the high degree of adoption of the most up-to-date versions users. Android is fragmented, fragmented system, otherwise to iOS, an operating system whose versions previous practically are only kept in those devices that are not updatable.

In addition, the adoption of the latest version of iOS always occurs at high speed; more or less depending on the circumstances, but in any case, wildly exceeding the pace of adoption that year after year is observed in Android. And as proof, we have the latest official data supplied by Apple, they reveal that three of every four users already have iOS 10 on their devices.

The adoption of iOS 10 already reaching 76% of devices, only four months after its official launch

Apple has updated the usage statistics of iOS 10, the latest mobile operating system designed for iPhone, iPad and iPod Touch, and the results are do amazing? Well actually no, because they are already accustomed to a high degree of adoption.

The Cupertino company keeps track of what version used iOS devices with which users visit the App Store and on this basis, it is able to determine the degree of adoption of the latest released iOS version, as well as what percentage of users use even earlier. 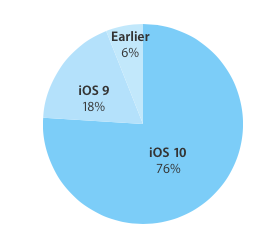 According to the latest statistical results that Apple has released more than three of every four devices are already running iOS 10. In particular, 76% of the iPhone, iPad and iPod Touch that have visited the App Store have done since iOS 10, while 18% have done so since some version of iOS 9. and only 6% used a previous version. These figures contrast strongly with the levels of adoption of Android whose latest, Android 7 Nougat, launched shortly after iOS 10, not not reach 1% of Android users.

The figures revealed by the Cupertino company reveal a growth of more than 13 percentage points since the data were updated for the last time at the end of November. Already before, Apple said that iOS 10 had the highest rate of adoption of any version in the history of iOS. In fact, this adoption rate of 76% in less than four months is really impressive and beat the record set by iOS 9.

After a series of beta releases in force since the beginning of the summer, 10 iOS was released officially Tuesday 13 of September of 2016 including a large number of new features and functions, such as a renovated messages app, the redesign of the maps and music applications, the new Home application for intelligent home control and much more.

The analysis Fiksu firm says that 10 iOS is installed already on 83% of active devices, 114 days after the release however, is common to other companies involved in the analysis of mobile web browsing to report figures slightly higher than their own analysis of Apple App Store, which tends to be more conservative.

The Apple graph shows that iOS 9 is still used by 18% of the user base of iOS, while the remaining 6% still make use of iOS 8 or an earlier version. as already pointed out at the beginning, the majority of these cases, especially as older, iOS updates to devices also ancient who already cannot be updated to new versions.

Apple only offers data from major releases (iOS 10, 9 iOS, iOS 8) without breaking down the percentage of use in intermediate minor versions.

The latest version of Apple’s mobile operating system is iOS 10.2; 10.2.1 iOS is currently in beta version and it is rumored that Apple will begin to release iOS 10.3 for the purpose of testing as soon as next week.

Previous Elago W3, the definitive charging stand for your Apple Watch
Next iOS 10 already reaching three of every four users