A week is what it has taken Apple to launch a new version of iOS, its operating system for iPhone, iPad and iPod Touch. The company has made available to all the users version 10.3.1 arriving with bug fixes and security enhancements from previous versions.

Apple has not made too many details about the changes that includes this new version of the operating system. In the update notes are limited to reporting that includes bug fixes and security enhancements. We assume that they have detected a problem after the mass of millions of users update and have decided to solve the problem as soon as possible.

As usual this update is available via iTunes and also from the devices. To update from the device, you must Access to settings – General – software update and follow the directions on the screen. If you prefer updating from iTunes, connect the device to your computer via the USB cable, open iTunes, and follow the steps on screen. In any case, we advise you to do a full backup of your device before you begin the upgrade. 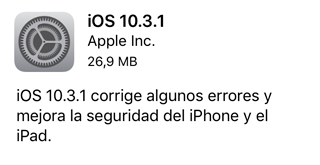 iOS 10.3, the version released last week by Apple, yes included a handful of new features and bugfixes, so it is recommended that you upgrade your device as soon as possible. Among the new features of iOS 10.3 you will find:

Previous WhatsApp will add the possibility to make payments between users
Next Apple confirms they are working on new iMac, Mac Pro, and screens for the professional sector