Samsung Galaxy S8 + vs iPhone 7 Plus – comparative of autonomy

Now that the Samsung Galaxy S8 + it’s official and there are units in the hands of specialized media it is time to see the first comparative reales from the device. On this occasion we must talk battery and more specifically to a comparative of autonomy of the Galaxy S8 + against the iPhone 7 Plus.

As we have already seen in the comparison of characteristics of both terminals, the S8 + mounted a 3,500 mAh battery while the 7 Plus iPhone stays in the 2,900 mAh. In addition to this difference, we find that Samsung terminal has a 6.2 inch QHD + AMOLED screen and the Apple option uses screens of type IPS LCD with 5.5 inch diagonal. 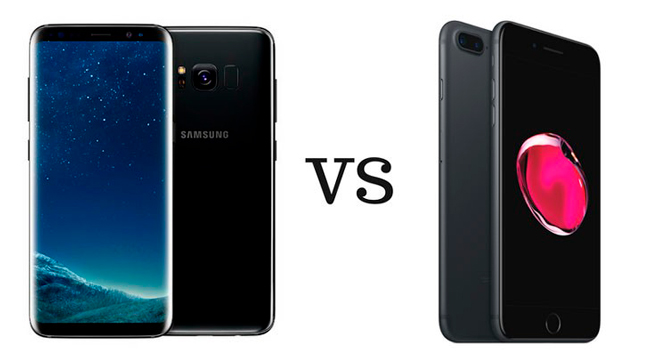 After this reminder of two of the main features of both terminals had to talk about the issue that really concerns us: actual battery of equipment performance, i.e., their autonomy.

Autonomy face to face: S8 + vs iPhone 7 Plus

From PhoneArena have been put to the test the autonomy of both terminals (as well as including other Android smartphones and the iPhone 7). To make this comparison have been a series of tests on computers seeking to level the playing field to the maximum. So have adjusted the brightness to 200 nits on all phones and performed the same tests on all computers.

As a result they have obtained that she the autonomy of 7 Plus iPhone is greater in more than one hour to the of the Galaxy S8 +, getting a total of 9 hours and 5 minutes of autonomy and the Samsung 8 hours Apple terminal.

This comparison shows that do not always have a higher capacity battery is synonymous with greater autonomy and put in value once more as the integration between hardware and software of the iPhone offers a clear advantage over their competitors.

It is true that the size and resolution of the display of the Samsung Galaxy + S8 can influence that autonomy has not been as high as the 7 Plus iPhone, although it is also true that the AMOLED technology has one much smaller than the IPS LCD.

This time the iPhone has managed to beat the Galaxy, but probably soon will see other comparative where Apple terminal do not leave victorious, finally and after all is a team that has been more than six months on the market.

Previous Touch of Life: School, free for a limited time
Next Dubai already has closer to the opening of its store Apple Dubai Mall